Yet Another Month Passes!

Good grief, today is the last day of June!

Would you believe that June has passed us by?
Where did it go?
So in an attempt to remind myself that it was with us for the whole 30 days I thought I would look back at what I actually did.


If you ask me that's a fairly full month, no wonder it passed me by in a haze!

Make Hay Whilst The Sun Shines.

How gorgeous has the weather been!?
It fantastic.
I have been trying, in between work to get my garden looking a little better again.
All that rain mad it go a little wild!
The outfit for today is this;
﻿ ﻿

Chilled but stylish, with of course a little sparkle!
Every girl needs a few sparkles don't they?
The garden is starting to bloom.

Hope fully after another few hours work it should look a little nicer too!
X x﻿
Posted by Please may I? at 10:10 7 comments:

Finally Feeling Human Again. (Apart For Being a Gleek!)

After what seems like months of sleep I am now beginning to feel more human.
It's so unreal how much a challenge like the Three Peaks takes it out of you.
I knew I would be shattered and had booked a few days to recover, which a friendly work colleague ignored and booked in meetings for me! Bless em! (not quite the words I used but I shall save your innocent eyes!)I had to be missing in action for the Mondays meeting, making me a little unpopular but you would have thought that they would have understood right?!
Tuesday's meeting I made but how I focused is beyond me!
Wednesday I drove 3 hours to Wales for a meeting and then 3 hours home!
Thursday was local, thankfully, as was Friday.
So much for recovery time eh! Thanks guys!!
My bites are starting to heal.

They have been driving me mad. I have had to take piriton as well as antihistamine cream too.
As for my blistered finger,
Well that's all better too.
If it wasn't for my achy knees my body would feel fairly normal!
I started back at swimming Friday, walking Sunday and classes begin in again this week.
Holiday body here I come!
What a beautiful weekend we have had.
Saturday saw us in London at the O2 to see Glee!
Sad you might say but you know what?
﻿﻿ ﻿﻿﻿
﻿﻿ ﻿﻿
They were Fantastic!﻿﻿
﻿﻿
One of the strangest things was seeing masses of smurfs every where!
After Glee we headed for refreshments in Starbucks.
﻿ ﻿
﻿ ﻿ ﻿
Even better I managed to get two new pairs of shoes.
In my eyes that covered two and a half mountains.
(Well one pair were in the sale!)
Photos to follow soon.
Enjoy your week.
X x
﻿﻿﻿﻿
﻿﻿﻿﻿
Posted by Please may I? at 09:10 6 comments:

The Challenge That Was....

After what has seemed likes years rather than months of preparation the Three Peaks Challenge has been completed.
In a strange way it is sad, yet in another elating!
On Friday 17th June we packed our car full to the brim with walking boots, rucksacks, clothes and snacks along with 1 driver and four very nervous walkers.
At 1.30pm we left for Scotland, arriving at our Premier Inn around 6.15 just as the others pulled up from their journey from our head office.
(Let me tell you getting 30 people booked in is no easy feet!)
At 7pm we all met for food and to calm our nerves before the big adventure.
Of course an early night was on the agenda, with many of us retiring to our rooms for 9.30/10pm.
Unbelievably 3 of the younger members decided to head into town returning at 3am!
(no surprise that they didn't manage to complete the challenge!)
After a McDonalds breakfast we all met in the bar to discuss the challenge and what was expected.
Maps were handed out, (laminated to survive the weather and double sided to make it less to carry) along with first aid kits for each van, (of which there were 5 in total plus our car) each person was assigned a van and drivers were briefed. The understanding amongst all the walkers was that they may have to change into different vans depending as to how quickly they descended each mountain.
The very talkative and excitable bunch that I normally knew were now nowhere to be seen, having been replaced with nervous and apprehensive faces instead.
The enormity of what we have signed up to had finally hit home.
Off we went to Fort William, allowing people to stock up at Morrisons and the surrounding walking shops with any last items they may need. 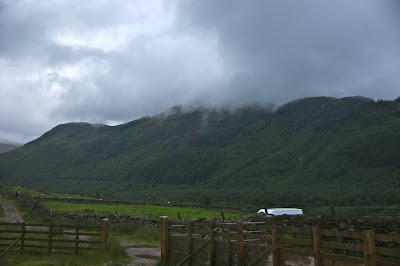 Finally at 4.50pm we off loaded at the Ben Nevis Inn ready to begin at 5pm.
The amount of walkers and vans were huge, this being the first peak week of the challenge. 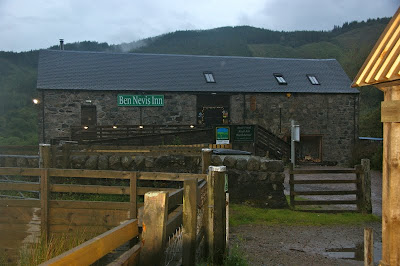 We said our goodbyes, wished each other luck and set off to climb the first mountain.
For the drivers this meant time to try and catch a few hours kip before we returned in what they hoped would be 5 hours or under. 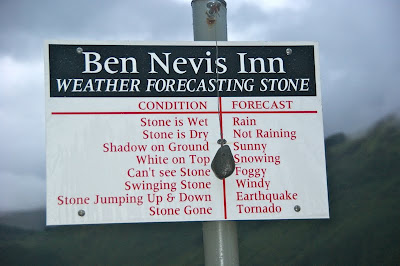 The weather was awful! Rain lashed down on us for the entire climb up. As we approached approximately two thirds up the mountain to the place where it was massed in snow in May, I was so relieved to see no snow at all. Just a very wet path.
Just before we approached the summit we saw our first bit of snow. It was only approximately 20ft across but the trouble people were having both climbing up and down was hysterical! A couple coming down as I was climbing up gave up trying to stay on their feet and opted for sliding down on their bottoms instead! Whilst it looked a fun way to do it the thought of a few hours with not only wet clothes but a freezing bum too meant in was not for me.
Hubby had reached the summit half an hour before me and even though he was freezing cold he waited for me to arrive in order to get a photo together. 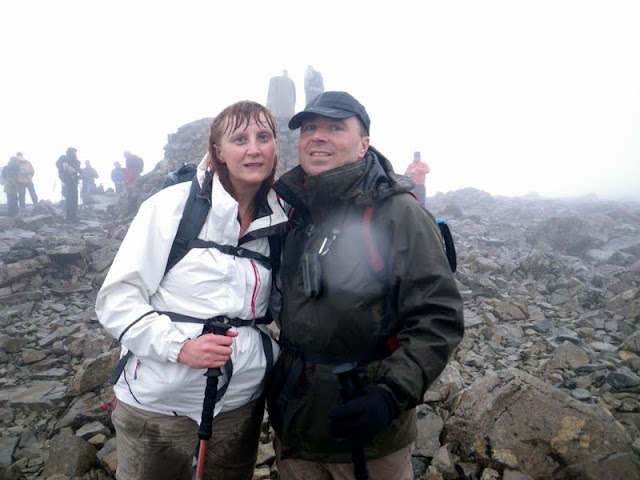 As soon as this was taken it was straight back down to the bottom for me! 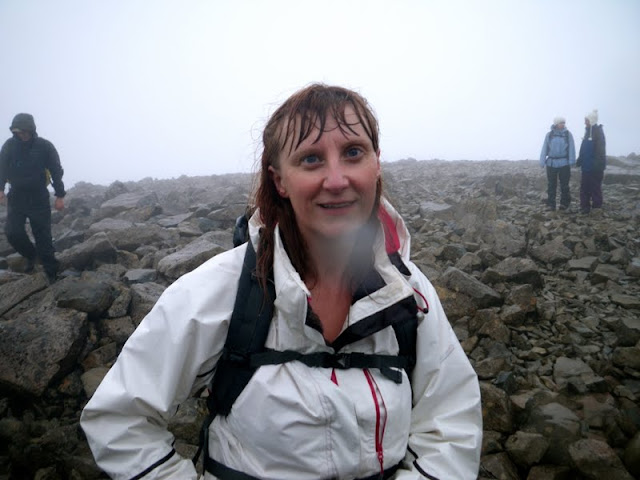 After 4 hours and 50 minutes I marched off the bottom, elated with my achievement. Whilst I wasn't one of the fasted I had paced myself the entire way, reaching the bottom feeling shattered, within the time allowed and with energy still in the tank for the next two mountains. A few of our walkers had flown up and down and I knew that they would be feeling it by the time we reached Scarfell Pike.